The Olive Trees cut down in Oria, Puglia, due to the presence of Xylella Fastidiosa were actually Xylella-free! 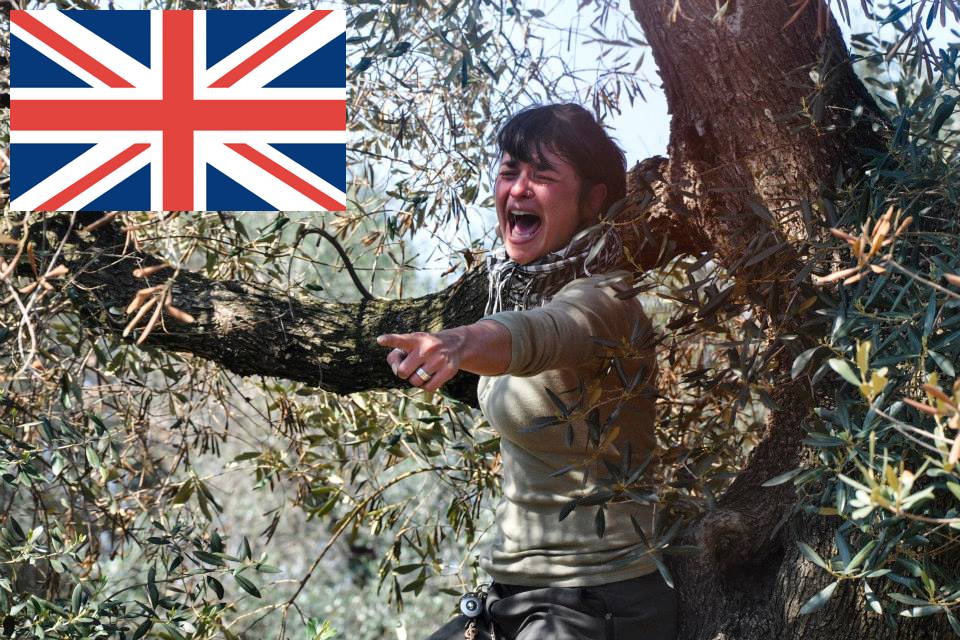 //EXCLUSIVE// The Olive Trees felled in Oria last May were Xylella-free.

They were cut down, but following subsequent tests carried out applying the same methods and the same “markers” as those used by the CNR (Italian National Research Council) in Bari (Puglia), the same (felled) olive trees tested negative to Xylella.

The news, exclusive to “Xylellareport.it”,  was announced just as a further 45 secular olive trees were felled in Oria (Brindisi). This announcement casts a heavy and unsettling shadow on the accuracy of the monitoring, sampling and analysis being used to eradicate the quarantine pathogen discovered in Salento (southern east end of Italy).

Negative results during tests on the olive trees felled in Oria and on the trees in Sannicola, using the same methods employed by the CNR in Bari.

These analyses were carried out by an Italian University department in utmost secrecy. Even if the equipment used is valid for this purpose and the specific skills of the operators have been validated by several official publications, the researchers want to remain anonymous as they lack official authorization by the Italian Ministry to “handle” samples that could ‘allegedly’ be infected with Xylella. They have requested the relevant authorizations but they have not yet been obtained.

The sampling was carried out by a Tuscan chemist with a long track record of experiences in this field and strictly following the criteria necessary for this type of sampling. He paid particular attention to preserve the samples in sealed sterile thermal containers provided by the University Department.

The operations of sampling and collection of the branches carried out immediately after their felling have been filmed by the chemist who kept the videos as evidence.

These results also differ from the official ones from the Regione Puglia, carried out apparently by the Istituto Basile Caramìa, whose working methods have been widely criticized during the last inspections by the European Inspectors. The latter had observed a high risk of contamination during sampling methods and arbitrary interpretation of the results.

The trees analyzed in the area around Sannicola tested negative using the same markers as the CNR in Bari (which on the contrary declared that those trees to be positive) and positive using other markers. 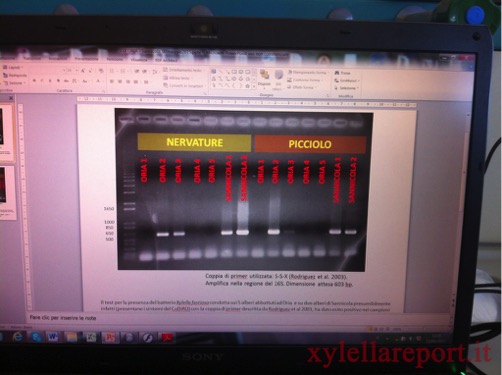 The results of the analyses differ when using different markers: in Oria 3 trees out of 5 tested negative, in Sannicola 2 trees out of 2 were positive, in Veglie neither of the two trees were positive. Only one small branch was positive.

The same doubts transpire with the results on two trees in Veglie marked with a red X (used to identify the trees to be felled): this time the analysis is even more detailed. The Tuscan team analyzed samples taken from the four cardinal points on each tree. One tree tested negative for Xylella while the other one resulted positive only on a branch exposed to the South. This could mean that by simply cutting down the infected branch, instead of felling the entire tree, it is almost 100% certain the bacteria would have been eliminated.

The Tuscan researchers who carried out the tests applied a DNA “amplification” method which identifies the Xylella DNA even if its presence is infinitesimal. According to the explanations I have got from the researchers, they usually amplify the DNA traces (proliferate or reproduce them) 40 times. To be sure and to make them even more visible, they actually amplified them 52 times (in so called cycles). In addition, the researchers applied different “primers”, in other words “markers,” capable of revealing the presence of the Xylella Fastidiosa DNA.

The really worrying fact is that whilst applying the “primers” used by the CNR in Bari the results turn out to be completely negative (We learned in a recent interview with Donato Boscia, CNR Director in Bari soon to be published on Xylella Report, that the primers used were Minsavage et al 1994).

On the other hand, when using other “primers” (Rodriguez et al 2003), the results reveal that 3 out of 5 trees felled in Oria have tested positive for Xylella, whereas one of the trees marked as infected in Sannicola is actually Xylella-free.

What does this mean?

It means that the results of the analyses are highly contingent upon how the sampling is carried out and on which methods are applied.

What do these results imply with regards the quarantine measures imposed by the European Union after being alerted to the presence of Xylella and its so-called drastic effects by the Regione Puglia and the Minister of Agriculture, Maurizio Martina?

Nothing: the quarantine measures still apply.

Nevertheless, these contradictory analyses could radically change the strategy adopted by the Region, the Minister of Agriculture and the EU. It could change the way the areas are being delimited, since the figures for the total number of infected trees would differ. Perhaps there would no longer be an epidemic!  One could possibly start considering these trees which tested positive as “abnormal cases” or “isolated cases.” Maybe they would no longer need to be eradicated or treated with pesticides as the last Implementing Decision of the EU stipulates.

These contradictory analyses also clearly show that the analyses carried out by the CNR are contestable. Furthermore, if these analyses had not been carried out in secret but under witness or had involved other contradictory parties, they would have led to different results, and on this score, only a judge could have come to a decision. In such an administrative case, a judge would have probably erred on the side of caution and excluded the felling of the olive trees.

We asked Mr Donato Boscia how the researchers of the CNR in Bari deal with such contradictory cases, in the presence of false negatives and false positives? He unfortunately refused to discuss such matters.

To resume, if the testing had been carried out with more transparency, maybe the Xylella case would deflate considerably.

However, at the end of the day, who really wants to know? As additional millions of Euros prepare to be injected for a state of natural disaster that maybe doesn’t exist at all! Particularly if the figures that underpin it do not justify the measures taken and can and should be contested. On the eve of new planned eradication, who doesn’t want compensation for farmers? Money for industrial reconversion of the olive tree fields? Money for testing? Money for research? Money for re-planting , money for new vineyards?

Let’s not forget that because of Xylella, it is now possible to cut down plurisecular olive trees and build on the land where they are felled.

Is it a surprise then that nobody really wants to know the truth?

Here is the answer from Donato Boscia, Director of the CNR in Bari replies to our question : “Which primers do you use to carry out the tests for Xylella and which protocols?”

Boscia: “we use 1994 primers and amplicons (fragments of DNA). With reference to the recurring doubts on the primers used (as declared in your book) I would like to point out that we applied the RST primers among others. These primers have been used since 1994 on a global scale to diagnose the presence of Xylella fastidiosa. The majority of the first reports of XF is based on the detection of the bacteria using these primers. Therefore, these primers are the most widely validated ones internationally. They were included in the EPPO official protocols. In addition, it is important to point out that the specificity of the primers used is widely supported by the amplicon sequencing, which is incontrovertible evidence of the amplification of XF genomic regions. This can be verified by means of the “accession numbers” listed in all publications on CoDiRO (Complex of rapid olive decline) released so far.”